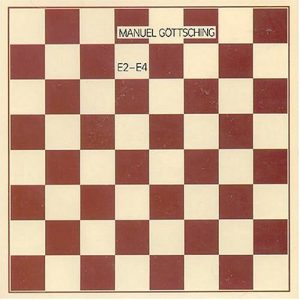 Maserati is set to release Maserati VII via Temporary Residence on October 2 and album that shows a well-oiled, better, faster, stronger, psych-influenced machine. Maserati VII, their first album conceived since Jerry Fuchs’ passing, exhibits the band’s uncanny ability to remain a relentless, driving, and focused band.  Recorded by Kevin Ratterman (My Morning Jacket, Young Widows) at The Funeral Home in Louisville, KY, and mixed by Steve Moore (Zombi, Lovelock) in New York, Maserati VII perfectly captures the essence and evolution of Maserati as face-melting, bone-rattling, ass-shaking Moroder Metal.
Ghettoblaster recently caught up with guitarist Matt Cherry to discuss one of his favorite albums, Manuel Gottsching’s E2-E4.  Here is what he told us…
What is your favorite album?
I’ve had about 20 favorite albums at different points in my life.  In my late teens it was MBV’s Loveless.  In my early 20s it was Slint’s Spiderland.  A few years later it was Pink Floyd’s Meddle.  About five years ago it was Manuel Gottsching’s E2-E4.  I guess I’ll go with this last one since it’s the easiest to talk about.
Do you remember when you received or purchased the album?
I probably heard it for the first time around 2006.   As per usual, I searched the web for the mp3s first, then I bought the vinyl later on.
What is your favorite song on the album?
Manuel lists like a dozen tracks on the record jacket, but it plays as one hour-long piece.  Songs are sort of irrelevant, but if I were being a smart ass, I’d say “the one about chess.”
What is it about the song that resonates with you?
It’s a track that you can both figuratively and literally get lost in.
Have you ever covered a song from the album?
No, we wouldn’t even attempt it.
What is it about the album that makes it stand out against the band’s other output?
Aesthetically, it’s similar to other records he did around that time, but the length in and of itself makes the experience of listening to it completely different than most records I’ve ever heard.
Have you ever given a copy of this record to anyone?  What were the circumstances?
The vinyl was damn expensive and way out of print, but I’ve sent friends mp3 links.  I know that is a really lame answer.
Which of the records that you’ve performed on is your favorite?
Honestly, I would say the newest Maserati record – not because they are the best guitar parts I’ve written (they’re not), but because I think the songs are compositionally some of the best stuff we’ve ever done.
What is your favorite song on the album and why?
“Abracadabracab.”
(Catch Maserati on tour at one of the following dates this fall:
10.31 – Orlando, FL @ Will’s Pub
11.01 – Miami, FL @ Churchill’s Pub
11.02 – Tampa Bay, FL @ Crowbar
11.03 – Chapel Hill, NC @ Local 506
11.04 – Washington, DC @ Black Cat
11.05 – Philadelphia, PA @ Kung Fu Necktie
11.06 – Reading, PA @ Reverb
11.07 – Brooklyn, NY @ Union Pool
11.08 – Pittsburgh, PA @ The Shop
11.09 – Columbus, OH @ Tree Bar
11.10 – Cincinnati, OH @ Motr Bar
11.11- Chicago, IL @ Empty Bottle
11.12 – Milwaukee, WI @ Stone Fly Brewery
11.13 – Champaign, IL @ Cowboy Monkey
11.15 – St. Louis, MO @ Firebird)