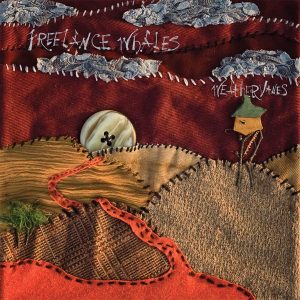 The Republic of Wolves recently announced the impending release of No Matter How Narrow the second full-length album from the band, written and recorded after a nearly two-year hiatus following their 2011 EP The Cartographer. No Matter How Narrow is a more immediate, concise, and light-hearted album than its heavy and somber predecessor, 2010’s critically acclaimed Varuna. The new album explores a more accessible sound while continuing to embrace the wide range of moods and dynamics that characterizes the band’s catalog.  The album will be available via Simple Stereo Records on December 17.
Ghettoblaster recently caught up with TROW’s Mason Maggio to discuss another accessible album that embraces a wide range of moods and dynamics — one of his favorites – Freelance Whales’ Weathervanes.  This is what he said about it.
What is your favorite album?
It’s really hard to think of albums that I can legitimately sit and listen to from start to finish, without being tempted to skip any tracks. Weathervanes by Freelance Whales is definitely one of the few examples of that, and it’s an album that I consistently revisit and find comfort in.
Do you remember when you received or purchased the album?
Not really, actually. I have a vague recollection of hearing something about the band on some small blog a few years ago, and I think I was intrigued by the name. So I gave it a listen and immediately had to share it with everyone.
What is your favorite song on the album?
Probably “Location”
What is it about the song that resonates with you?
Like most of the songs on the album, it manages to be both infectiously catchy and hauntingly beautiful at the same time. This song in particular embodies the band’s kind of quirky charm really well, and the lyrics feel effortlessly poetic (“What a tinder box we live in / And what a flammable heart I’ve been given”).
Have you ever covered a song from the album?
Actually yes, I’ve done a solo acoustic cover of the song “Starring,” which I posted on Youtube a couple of years ago.

What is it about the album that makes it stand out against the band’s other output?
The band has only released two albums to my knowledge, and Weathervanes was the first. I don’t want to criticize their second album, Diluvia, but it doesn’t quite have the same simplistic, yet eclectic beauty that their debut displayed. To be fair, nostalgia plays a role in my attachment to Weathervanes, and it’s always hard to listen to a follow up album objectively when you’re constantly comparing it to something that you’ve loved for years.
Have you ever given a copy of this record to anyone?  What were the circumstances?
I gave my only physical copy of the album to my girlfriend to listen to in her car, and she’s never given it back. Aside from that, I’ve shared it with quite a few people online.
Which of the records that you’ve performed on is your favorite?
I’d have to say our upcoming album, No Matter How Narrow, is my favorite thing that we’ve done. We weren’t trying to do anything grandiose or epic or particularly conceptual, we were mostly just creating the songs that we’d want to listen to. So it was largely about pleasing ourselves as both musicians and music-lovers, and I think we succeeded at that.
What is your favorite song on the album and why?
That’s very hard because the whole process is still so fresh in my mind, but at the moment I feel like “Pioneers” is at the top of the list. It’s got an almost poppy sound while still being kind of dark and ominous, so it’s a fun contrast.
(For more information about The Republic of Wolves, visit:
facebook.com/therepublicofwolves
twitter.com/therepofwolves
youtube.com/therepublicofwolves
www.republicofwolves.com)