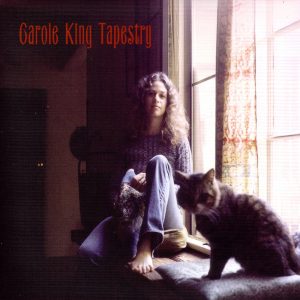 Saddle Creek veteran, Maria Taylor, has announced plans to release a new album, Something About Knowing, on October 29. While Maria has already gained widespread recognition as one-half of the dream-pop duo Azure Ray, released four solo albums and an EP and collaborated with esteemed musicians including Conor Oberst (Bright Eyes), Michael Stipe (R.E.M.), Jim Eno (Spoon) and Moby, her prolific career has only scratched the surface of what the Alabama-based artist has to say.
Her first release after becoming a mother, the aptly titled Something About Knowing, is the critically acclaimed artist’s most assured record yet – celebrating her folk, pop and electronic lineages with the casual grace and confident ease that comes with parenthood.
Ghettoblaster caught up with Taylor to discuss a record that influenced her at an early age and the spirit is certainly felt in her own artistic output.  This is what she said about Carole King’s Tapestry.
What is your favorite album?
Tapestry by Carole King.
Do you remember when you received or purchased the album?
It was the first CD I ever owned (it was all cassette tapes before that). My parents gave it to me as a birthday present when I turned 13.
What is your favorite song on the album?
That is a real toughy. I guess I would say “So Far Away”.
What is it about the song that resonates with you?
Well, the melody is what first got me, way back when I was a kid. I have always been a sucker for songs that make you feel nostalgic. The lyrics started to really resonate with me in my 20s, while I was in a relationship for many years where both of us were touring all of the time. Now I listen to it and it makes me think of all the late night drives through the desert with a van full of friends, looking out the window for hours each day and watching the landscape change ( with a sippy cup of wine in hand).
Have you ever covered a song from the album?
When I was 14 I covered “You’ve Got A Friend” and gave cassettes to all of my friends for Christmas. Ha ha.
What is it about the album that makes it stand out against the band’s other output?
She had been writing hits for many artists in the ‘60s and then received criticism when she started playing and singing her own songs. I think she had something to prove with Tapestry, though the songs never lost their integrity.
Have you ever given a copy of this record to anyone?  What were the circumstances?
I’ve probably given it to plenty of people, but thanks for the reminder.
Which of the records that you’ve performed on is your favorite?
I’m a pretty huge fan of Now It’s Overhead’s self-titled record.
What is your favorite song on the album and why?
“Heart String Puller.” The refrain is this phrase ” Don’t ever go away from here, and I will never go away” … but it repeats the same melody and words as the chords change to make it feel more and more melancholy, as though he knows they will split. I love the foreshadowing and I also love singing four-part harmonies with my great friends.
(Catch Maria at this upcoming date:
9/6 – Birmingham, AL @ Iron City with Jim James (My Morning Jacket)
Her new album Something About Knowing is set to release October 29.  Follow her here:
Facebook: https://www.facebook.com/mariataylor
Twitter: https://twitter.com/maria_taylor)