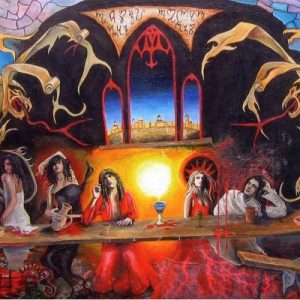 When Ferret Music recording artists’ Twelve Tribes called it a day in 2007, Dayton metal fans mourned the loss of an internationally recognized powerhouse act with a decade and a half of touring, MTV appearances and a significant back catalogue of critically-acclaimed albums under their belts. To the delight of local headbangers, it wasn’t long before vocalist and multi-instrumentalist Kevin Schindel began pulverizing eardrums with Mouth of the Architect (Translation Loss) and channeling Norwegian black metal maestros with Bringers of Disease (Translation Loss).
But, metal fans in some circles held their breath that he’d someday reunite with Twelve Tribes bandmates in some capacity for a project. Schindel, former Twelve Tribes bassist Matt Tackett, and Tackett’s bandmate Jay Bird from short-lived Goodlife Records band Waking Kills The Dream, emerged in 2011 with the classic metal -inspired trio, Neon Warship, that nods to metal forefathers like Led Zepplin, Black Sabbath, St. Vitus, Clutch and newer heavy rockers like Queens of the Stone Age.
Ghettoblaster recently caught up with Schindel to his favorite album, Graveyard’s Graveyard.  This is what he had to say about it…
What is your favorite album?
Well, that is a difficult question for me.  I’ve liked a lot of different albums over the years.  If I was to go with one band’s album I’ve liked recently, I’d say Graveyard’s self-titled.  I’ve been way into them since I heard it.

Do you remember when you received or purchased the album?
I got this album in the beginning of 2011.  I found out about them from a website I visit.  Their video for “Hisingen Blues” had just been posted and I like the song so much that I looked to see what other releases they had.  “Hisingen Blues” had not been release yet, so I ordered their first one and fell in love with it immediately.

What is your favorite song on the album?
“Satan’s Finest, well, that’s for sure!” Ha! You have to know the song to get that.
What is it about the song that resonates with you?
I love how they start the song with that kind of mellow/medieval intro,   then straight into the sweetest groove ever.  The chorus is awesome and memorable, but the end… So good!  Slow simple bass melody into the heaviest breakdown of the CD.  It just makes you wanting to scream the lyrics with them.

What is it about the album that makes it stand out against the band’s other output?
It’s their first release and it’s the first one I heard all the way through.  All their releases are amazing, but when I heard this one, I was floored.  It’s kind of hard to get over.  So many good songs like “Evil Ways” and “Lost in Confusion.”  They continue to impress, but nothing will compare to getting through that first listen of the self-titled album.  Those vocals mixed with the sweet riffage and lead guitars, unforgettable.

Have you ever given a copy of this record to anyone?  What were the circumstances?
I introduced it to my bandmates immediately.  I felt they had to check them out.   It’s required listening in my book.  They have that classic rock feel I’ve been looking for in a new band.

Which of the records that you’ve performed on is your favorite?
Honestly, it has to be the Neon Warship recording.  I’ve recorded with other bands I’ve been in, but this is my dream child.  It’s got just about everything I like to do musically in it.  It’s heavy, melodic, and atmospheric at times.  It’s seriously been a blast playing music with these dudes.

What is your favorite song on the recording and why?
That’s a tough question too.  I like certain things about each song.  If I had to pick one, it would probably be “Weather Breeder.”  It’s just a solid song from beginning to end.