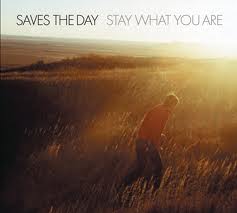 Stay What You Are

Buffalo, NY’s I Can See Mountains are just one band from the current crop of pop punkers who are turning the genre on its ear.  Their debut album, Life on a Houseboat, is currently in the can and debuts via Panic Records on July 2.  Taking cues from contemporaries like Transit, Tigers Jaw and The Wonder Years, these energetic youth also pay homage to staples like Saves The Day and The Get Up Kids.
It was no surprise that when Ghettoblaster recently caught up with I Can See Mountains’ Kevin Hoffman to discuss one of his favorite records, Saves The Day’s Stay What You Are. Floated to the top of his “must talk about” list.  This is what he said about it…
What is your favorite album?
Saves the Day’s Stay What You Are.
Do you remember when you received or purchased the album?
Sophomore year of high school, sometime between homecoming and the time Drew Bledsoe joined the Bills.
What is your favorite song on the album?
“This is Not an Exit.”
What is it about the song that resonates with you?
|
The chorus has been stuck in my head for 10 years. I listened to a lot of fast punk music and the fact that they could get their point across in a more melodic fashion really stuck out to me.
What is it about the album that makes it stand out against the band’s other output?
The darkness at certain points and the optimism at others, it felt like a real window into how they were feeling. Early albums were angsty, then they tried to do a Beatles thing. It seemed like everything really just came together for them at the right time, I’m not sure they could ever recreate the way this album feels, In fact, I’m not sure anyone could really.
Have you ever given a copy of this record to anyone? What were the circumstances?
I gave a copy to the girl I was dating at the time, but I’m not really sure she cared all that much. She had blonde hair but she did buy their shirt and wear it proudly for like three weeks. She wasn’t like those other girls, man.
Which of the records that you’ve performed on is your favorite?  T
The record we’re about to release, Life on a Houseboat.
What is your favorite song on the album and why?
The last song, titled “The Tigers Have Found Me and I Do Not Care,” because this song capped off months of hard work and trying times. I know that probably sounds cliche but me and Matt didn’t always see eye to eye during the creative process.  But in some ways I think that was actually a benefit, it forced us to explore every path and look at ideas from different angles. We were also able to incorporate spoken word into the first verse, which is something we used to do a lot of when we were recording in our bedrooms but got away from when we started playing full band. It reminds me of that time period. I learned about what it really meant to have a strong neck.

Tags: I Can See Mountains, Panic Records, Saves The Day