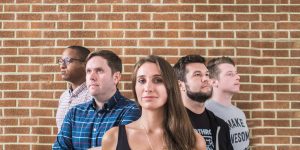 It’s Always Sunny When You’re Cool, the debut album from Washington, D.C.’s Flavor Waster, plays like the soundtrack to a square peg fitting perfectly into a round hole.
Hallucinated into existence by film composers – and former members of D.C. instrumental post?hardcore trio Caverns – Kevin Hilliard (guitar/synths/percussion/programming) and Patrick Taylor (synths/piano/programming) during the breaks that punctuated a week of all?night movie scoring sessions, Flavor Waster’s music flies from the speakers as a restless mosaic of the duo’s past and present musical obsessions.  The band, rounded out by vocalist Jodi Jones, drummer Martin MacAlister, and multi-instumentalist Ryan Burke effortlessly weaves the hyped, pulsating grooves of the reggaeton, soca, and calypso music often heard in Taylor’s familial home in Guyana and the d?beats and breakdowns of the hardcore music Hilliard cut his teeth on, with a reverence for trashy synths and shoegazing vocals. Their diverse yet unified debut album “It’s Always Sunny…” finds vitality in unexpected juxtaposition and melodic contradiction.
Jones soulful, spectral vocals are cast against the backdrop of the band’s often bombastic instrumentals. This unexpected union radicalizes rather than tempers both Flavor Waster’s unrepentant heaviness and its melancholy melodicism.
It’s Always Sunny When You’re Cool will be released on November 20, 2015 through School of Resentment Recordings. The band will be touring extensively in support of the album Winter 2015?Spring 2016.
Ghettoblaster recently caught up with Hilliard to discuss his favorite record. This is what he had to say about Can’s Tago Mago.
What is your favorite album?
This question tears me apart because my answer to this probably changes daily. Hence whatever I commit to here, I will likely regret my answer everyday for the rest of my life. I’ll gut it out and say that at the moment it’s Tago Mago by Can.
Do you remember when you received or purchased the album?
If memory serves, back during the Napster/Ulrich war of the early Aughts I read about it in some publication I don’t recall and promptly stole it via downloading (sorry Lars).  I’ve bought it a few times since in multiple formats, so I feel I’ve atoned for my youthful indiscretion.
What is your favorite song on the album?
“Halleluhwah.”
What is it about the song that resonates with you?
The impossibly groovy drum beat. Initially this was the only track on the record I really dug.  Falling in love with Tago Mago was a marathon, not a sprint. This was the song that kept its hooks in me long enough to keep bringing me back to the record until it finally “clicked” with me.
Have you ever covered a song from the album?
No and I wouldn’t.  Mostly because I’m not particularly interested in doing covers generally, but, specifically for Tago Mago, I just know I have nothing creative to add, embellish, or “re-imagine” about any of the tracks that would justify doing a cover.  I’m sure it would be fun to just experience playing “Mushroom” or “Paperhouse” myself or with Flavor Waster, but I’d rather just listen to Can do it.
What is it about the album that makes it stand out against the band’s other output?
I can’t really essentialize the appeal of Tago Mago that makes me prefer it to Ege Bamyasi, which is a lot of other people’s favorite Can record, or Future Days. All three are brilliant and lots of Can’s subsequent output has positively wrecked me as well.  For my own idiosyncratic reasons, I think I like this one the most because it was my first exposure to any band that was so far ahead of its time. Also, thinking about this record reminds me of a time in my life full of musical discovery and general posi-vibes.
Have you ever given a copy of this record to anyone? What were the circumstances?
I have not. Tago Mago isn’t something one gives another, it’s something one guides others toward.  I have certainly evangelized on Can’s behalf for years. I’ve awkwardly pressured friends into pretending they like the album because I’m so passionate about it that they probably felt I’d be shattered if they didn’t tell me it’s great. However, haven’t ever had the occasion where I thought Tago Mago would be the MOST thoughtful or well received gift I could give any person in my life.
Which of the records that you’ve performed on is your favorite?
Without question it’s Flavor Waster It’s Always Sunny When You’re Cool.  I know every musician’s favorite record is the latest one, but, despite the fact that making this took years off of our lives, I’m still ecstatic with how it came out.
What is your favorite song on the album and why?
They’re all my babies, I can’t pick one favorite.  It’s not my favorite over its siblings, but I will say the song that surprised me the most in the end is “Where We’ve Never Been, We’ll Never Go.” It was sketched out as a low key minimalist counterpoint to the rest of the songs on the record.  It’s a dead simple composition but from its original conception to the final recording it kept changing character and became one of the most haunting and unique tracks on the album.
(Visit the band here: Website / Facebook / Twitter)