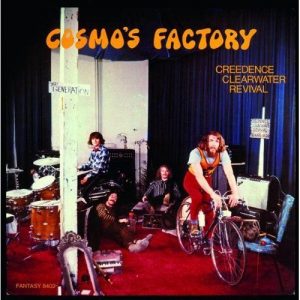 Turbo Fruits a rock n roll band from Nashville, Tennessee deal in wild abandon and unfettered debauchery; in buzzsaw guitars and pummeling, primal rhythms. And their brand of visceral rock is perhaps best evidenced on their new album Butter, which hits the streets on September 11. Recorded in eight days in Austin, Texas with Spoon’s Jim Eno at his Public Hi-Fi studio, Butter is the follow up to their 2009 Fat Possum album Echo Kid and the 2007 Ecstatic Peace debut. It’s a spastic, slab of fun that thrashes its way through punk, surf, and power-pop.
Ghettoblaster recently caught up with Jonas Stein a week before Butter’s release to discuss another great American rock band, and his favorite album from their discography; Creedence Clearwater Revival’s Cosmo’s Factory. Here’s what he told us…
What is your favorite album?
My favorite album from start to finish is probably Cosmo’s Factory (Creedence Clearwater Revival).
Do you remember when you received or purchased the album?
Yeah it was passed down to me on vinyl from my Uncle, Glenn.
What is your favorite song on the album?
“Ramble Tamble.”
What is it about the song that resonates with you?
There’s nothin’ that makes me feel more excited while driving. This song’s energy always gets me goin!
Have you ever covered a song from the album?
Yeah, Turbo Fruits covered “Ooby Dooby” a few shows. It’s a fun song to play.
What is it about the album that makes it stand out against the band’s other output?
For me, it’s the opening track, “Ramble Tamble,” and the strong follow up in all the songs after that one.
Have you ever given a copy of this record to anyone? What were the circumstances?
Yeah I’ve given it to a few friends. Just tryin’ to spread the love!
Which of the records that you’ve performed on is your favorite?
BUTTER – our new album that’s out in Sept!
What is your favorite song on the album and why?
Probably “Where the Stars Don’t Shine.” I love a solid opening track to grab people’s attention. That track was recorded live in the studio with no overdubs on instruments. No messin’ around!
(Visit Soundcloud for a preview of Turbo Fruits’ single “Harley Dollar Bill$?” http://soundcloud.com/muzik_player/harley-dollar-bill/s-PeVDk or stream the album here: )