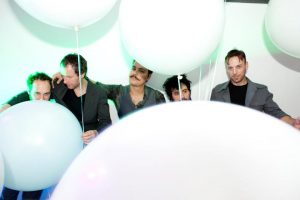 Tyburn Saints fully embrace the sonic landscapes of shoegaze and dream-pop, with blankets of warmth ushered in by Cocteau Twins-esque guitars (similar also to LSD and the Search for God or The Bethany Curve) juxtaposed against the intelligible, meaningful vocals of lead singer Johnny Gimenez. He still has a voice comparable to Nick Cave or Stephen Merritt, though at times it comes through with much more aplomb and command like David Bowie.
With the Night in Our Eyes, the new album from was recorded by Ian Love (Rival Schools) in Brooklyn, NY and produced with Grammy award winner Guy Massey (Beatles, Manic Street Preachers, Depeche Mode, Spiritualized and The Chameleons) in London. It was released by Balaclava Records out of São Paulo, Brazil.
Ghettoblaster recently caught up with Gimenez to discuss his favorites (purchased in Dayton, Ohio no less!).
What is your favorite album?

It’s impossible to pick a favorite, but among the earliest albums that I purchased as a kid were Depeche Mode – Some Great Reward, Catching up with Depeche Mode and Violator, The Smiths Best I and II, Morrissey Your Arsenal and The Cure Wish and “High” Maxi single (I was really into maxi singles).
Do you remember when you received or purchased these?

Some Great Reward  and Catching up with DM was while I was staying with family in Dayton, Ohio for the Summer. I arrived with nothing and returned to NYC with those cassettes, new sneakers, a skateboard and my first pair of eye glasses.
What is your favorite song on those?
“Dreaming of Me” and “Blasphemous Rumors.”
What is it about the songs that resonates with you?

One was pure pop, a digital version of a 1950’s teenage idol single and the other was so blatantly dark, the lyrics haunted me.
Have you ever covered a song from one of those?
“Only in fantasies.”
What is it about the album that makes it stand out against the band’s other output?

The old DM albums were beautifully simple and emotionally heavy in a sort of trivial way. It was Violator that made me look forward to becoming a man.
Have you ever given a copy of these records to anyone? What were the circumstances?

I’ve given copies of all the albums mentioned to two teenage sisters who came to live with their older sister who lived in the college town where I was going to school. They grew up in caves in a communal living situation in Arizona and told me that they had no interest in music, only visual arts and crafts. Not being able to accept this, I loaned them a starter package of albums. Months later I found them scattered on their floor, scratched and broken. Given their prior living situation, I shouldn’t have been surprised.
Which of the records that you’ve performed on is your favorite?

With the Night in Our Eyes.
What is your favorite song on the album and why?

“A way with her”. It’s a powerful song to perform live. It makes me feel like I’m simultaneously headlining the Rose Bowl in Pasadena and pumping a fist at the end of the Breakfast Club.
(Check out music from Tyburn Saints here: http://tyburnsaints.bandcamp.com/.)