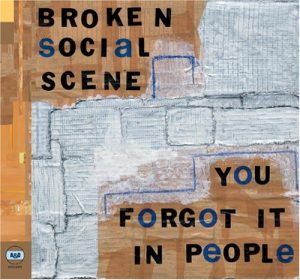 You Forgot It In People

Long Lost is an emerging indie rock band that consists of Joe Boynton, vocalist for beloved indie pop-punk band Transit, guitarist Mat Morin, bassist Mike Moschetto and drummer Aviv Marotz.  Their debut record, Save Yourself, Start Again (fans can purchase Long Lost’s new album now at iTunes, and No Sleep Records), was co-produced by the band and Gary Cioffi, Jr. (Transit, Misser).
Ghettoblaster recently caught up with Boynton to get a peek at his influences.  This is what he said about one of his favorites, Broken Social Scene’s You Forgot It In People…
What is your favorite album?

Broken Social Scene – You Forgot it in People.
Do you remember when you received or purchased the album?

This record came out in 2002, but I didn’t find out about it until around 2008. One of my ex girlfriends had a song title “Cause = Time” tattooed on her wrist. When I asked her what it meant she showed me this record. I’ve been hooked ever since.
What is your favorite song on the album?

It’s really difficult to pick a favorite song off this album but if I were to pick one it would be “Anthems For A 17 Year Old Girl”.
What is it about the song that resonates with you?

I just find it breathtaking, you know every time it comes on I drop what I’m doing and just sit there and listen. It’s haunting and peaceful at the same time, it builds and builds but its calm and relaxing the entire way through.
Have you ever covered a song from the album?

No, Broken Social Scene is a combination of about 10 other really great bands.  I really can’t see myself being able to do one of their songs any justice to be honest. It would be incredible to perform a song like this live someday, who knows, maybe someday I’ll attempt it.
What is it about the album that makes it stand out against the band’s other output?

Their first album Feel Good Lost is almost completely instrumental, I love it, it’s just a different experience all together. I’ve always been fascinated by the human voice and all the many ways it can help express what someone else is going through. The vocals on this record are unlike anything I’ve heard before. They’re haunting, delicate, arranged free and loosely around the music. It’s really hard to appreciate any of their albums without a nice pair of headphones.
Give it a listen, check it out for yourself.
Have you ever given a copy of this record to anyone?  What were the circumstances?
Not really, I just spread the word about the records I enjoy to my friends and anyone who enjoys talking music. I’ve always felt the only way to appreciate music is by checking out as many avenues of sounds as possible. I’m a fan of ‘90s hip hop, ‘90s alternative rock, death metal, pop, electronica, punk and hardcore, folk, spoken word poetry.
I try and listen to just about everything to see what strikes me.
Which of the records that you’ve performed on is your favorite?
I guess my favorite records are my most recent. I look at them sort of like time capsules of sound. Transit – Young New England and Long Lost – Save Yourself, Start Again are my favorite at the moment, they pretty much represent where I’m at in life and how I feel about it as a whole.
What is your favorite song on the album and why?
My favorite song off Young New England (2013) is titled “Summer, Me” it’s a sequel song to an older track titled “For The World” the lyrics of the song are about my oldest memory I have as a kid at my Aunt’s tiny cottage in Maine. I’m very lucky to have had such a nice childhood and loving family growing up. When I’m out on the road for long periods of time this song sort of becomes like an ornament or charm I get to keep and carry my feelings of home around with me wherever I go.
My favorite song off of Save Yourself, Start Again (2013) is titled “This Love Will Grow”
The lyrics are based off of a David Lynch movie titled “Blue Velvet”. Lynch’s films have really inspired me over the years, some of my songs are about me and others are about fictional characters I’ve created from little mental pictures in my head. I’ve always been a pretty strange kid growing up so instead of hiding it I’d rather just embrace it and let it come out through my music.