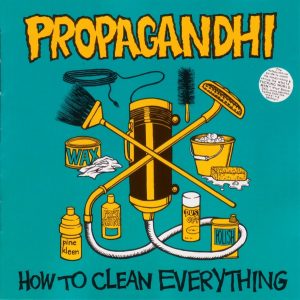 How To Clean Everything

When Cleveland, Ohio’s Worship This! released their video for the song, “Michigan Ocean,” from The Nard Years 7” that dropped via Messy Life Records in January I probably watched it 12 times in a row.  There’s no storyline, explosions, animation or naked ladies, just four average dudes playing exceptional, heartfelt hardcore inspired punk in their basement.  The bro-formance nearly brought a tear to my eye as I recalled with nostalgia blowing my eardrums out with homies in similar Ohio basements.
Worship This! signed with Mayfly Records this spring and will release a split 7? with Signals Midwest in the fall. The 7? will feature an original by each band, plus both bands covering one another. Worship This! are also planning to release their debut full-length via the label in the winter, following and August tour.  Ghettoblaster recently caught up with Worship This! guitarist/vocalist Jeremy “Rozco” Provchy to discuss a record that brings him feelings on nostalgia, Propagandhi’s How to Clean Everything.  Here’s what he had to say about the record…
What is your favorite album?
Propagandhi’s How to Clean Everything.
Do you remember when you received or purchased the album?
I was 13 years old and my best friend and I had discovered the Fat Music for Fat People compilation at the local pawn shop and we snagged it for a dollar. Our goal was to acquire every bands record on the compilation because we had never heard anything else like it. We went to the mall and had them special order the record. When we finally got our hands on it, it opened our eyes to thoughts and riffs we’ve never been exposed to and it would forever change the way we listened to and thought of music.
What is your favorite song on the album?
It’s so hard to pick one, but I’d have to go with “Anti-Manifesto.”
What is it about the song that resonates with you?
This was the first song I had heard on the comp., and still when I hear it today, I am immediately struck with nostalgia. It reminds me of the time when life was about skateboarding and punk rock and making our way through adolescence. Once I sat down with the liner notes, it meant something completely different and to this day plays a part in the way I think a band should present themselves.
Have you ever covered a song from the album?
No. I’m too afraid to fuck up a masterpiece and embarrass myself.
What is it about the album that makes it stand out against the band’s other output?
Even being their first release, being 13, I still had to pull out the dictionary and familiarize myself with the vocabulary in these songs. Their later records would go on to surpass this and introduce me to ideas that just weren’t introduced to kid growing up in the suburbs of Ohio. I definitely think that there is something to be said if a record can raise that much curiosity in a young punk kid who was too lazy to do anything but skate and play guitar.
Have you ever given a copy of this record to anyone? What were the circumstances?
I let one of my old friends borrow this record and his father, who was a pastor, burned it and I wasn’t allowed to come over his house for quite some time.
Which of the records that you’ve performed on is your favorite?
I’m happy with our last release, The Nard Years, because I feel like we kind of pulled together our sound. It takes time for musicians to get used to each other’s writing styles and I feel that it finally came together. I’m pretty sure that the record we just finished writing will be my favorite. I’m really proud of the work we put into it and I’m excited for people to hear it.
What is your favorite song on the album and why?
I really like “Michigan Ocean.” This was the first song of this batch of songs that we really starting feeling like our sound was evolving into something more consistent. We started writing together as opposed to someone writing a song and everyone else just added their parts to it.