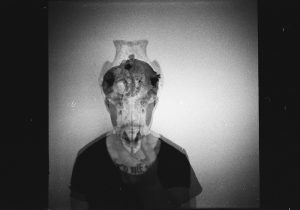 Mother Room plays an interesting combination of experimental drone and noise with gothic and sometimes even pop elements interspersed. Think Dirty Beaches meets Forest Swords with the distortion turned way up. I think you might dig it.
The Bay Bridged premiered “Debt Collector” recently and called it “a dark and enthralling song that will leave you aching for just a bit more,” and of the upcoming Scorched LP “a refreshing and absolutely captivating piece of music.”
Ghettoblaster recently caught up with sole member James Meuleners to discuss one of his favorite records ever, Sleep’s Dopesmoker.
What is your favorite album?
Sleep’s Dopesmoker.
Do you remember when you received or purchased the album?
I bought it five years after first hearing it. I now own the original release (my girlfriend rules), and the reissue.
What is your favorite song on the album?
“Dopesmoker.”
What is it about the song that resonates with you? |
Well it’s nearly an hour long song, so I think the thing that resonates the most is the ever changing subtleties in the guitar/drums/bass. It puts you in a trance. The solos, lyrics, and lulls are perfect.
Have you ever covered a song from the album?
Hell No!
What is it about the album that makes it stand out against the band’s other output?
If I’m correct Sleep only put out two or three albums with Dope Smoker being the last. It stands out because it’s one one-hour song!
Have you ever given a copy of this record to anyone?  What were the circumstances?
I’ve forced people to listen to it.
Which of the records that you’ve performed on is your favorite?
My latest record Scorched, which comes out in June, is probably my favorite recorded I’ve played on.
What is your favorite song on the album and why?
I think “Revelations” is my favorite track. It’s just a really fun song to play live.
(Visit Mother Room here: http://thenativesound.limitedrun.com/.)