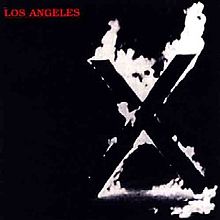 Greensboro, NC slacker rock heroes Totally Slow are teaming up with homestate label Self Aware Records to release their new self-titled LP. Pre-orders will launch Sept. 1.  The garage, surf and punk inspired trio isn’t without significant influences.  From Agent Orange to Big Boys, and Descendents to Superchunk.  Although they wear their hearts on their sleeves, one influence has stuck with bassist Greg Monroy as his favorite…
Ghettoblaster caught up with Monroy to discuss Los Angeles by X.  This is what he said…
What is your favorite album?

That’s a nearly impossible question.  I almost have to pick a genre or a time period to begin deciding that…but The first thing that pops into my head is probably the “one”.  Los Angeles by X.
Do you remember when you received or purchased the album?

When I was in high school I dated a girl who was in college and lived in a town with better record stores.  She bought it for me as a birthday gift.  Probably my 16th birthday.  I feel like I must have scored a tape from somebody but that’s how I got the actual record.
What is your favorite song on the album?

The title track, Los Angeles.
What is it about the song that resonates with you?

There are really a number of things about it.  I moved away from LA the year that record came out.  When I discovered punk rock four years later, that music, and particularly X, became like a bridge back to LA for me.  Even though the lyrics are about leaving LA, the story really has no relation to my own experience.
The real resonance for me was just the fact that this music was being born in my hometown after I was no longer there.  And even though I’d moved off to the woods of NC and tried for years to fit in here, I had somehow managed to wind up in parallel with this record and this whole awesome scene that was happening there in the mid and early ‘80s.
The other thing that resonates with me is just purely what a unique piece of music it is when you listen to it in context to everything going on around it.  Compare it to other music in the same scene like Black Flag and the Germs and it’s so wonderfully different.  It has this sort of blues/train beat to it instead of the typical rapid hardcore beat.  The guitar is masterful (Billy Zoom is a hero) but it never shows off.  The arrangement, the vocal harmonies and dissonance… it’s nothing like any of its contemporaries but somehow it sits right there in the same record bin as D.I. or the Circle jerks and it makes total sense.
Have you ever covered a song from the album?
No, not from that album.  I occasionally did “White Girl”, which is from a different record and “Little Honey”, which was whole different incarnation of X (The Knitters).
What is it about the album that makes it stand out against the band’s other output?

I really think that this being their first record and it being right at the genesis of the LA punk scene is what makes this record such a landmark.  Nothing had been done yet.  There was no trajectory set, there was hardly even a context for the record.  Here you have two poets with a country/western/LA punk thing going, A jazz virtuoso playing at double speed and a guy with a crazy sense of time who beats the crap out of the drums with perfect precision, and all of this ends up being produced by the keyboard player for the Doors?!?!  They made a lot of great records and went through a lot of growth and change but Los Angles was everything all at once and totally out of nowhere.  It feels the flaming X on the cover was a prophetic symbol of how this record was about to light the fuse on the whole LA scene. This was not the first record from that scene but it was in that first wave of records.  The single they put out prior to this was however the first recording to come out of the LA scene and it included a song that later showed up on this record.
Have you ever given a copy of this record to anyone?  What were the circumstances?

I’m not sure that I have actually.  I think usually when I turn someone onto X I give them more of a sampler.  X has such a broad range that I like to give people more of an overview.  Even though it’s my favorite record I’m more inclined to try and get someone to watch the documentary “X-The Unheard Music”.
Which of the records that you’ve performed on is your favorite?

Honestly the record we just finished has got to be my favorite anything I’ve ever played.  Everything with this band has been so easy and so automatic and the recording experience for this was no different.  Its one thing to make some songs you like but it’s another thing to get them recorded exactly as you imagine them or better.
What is your favorite song on the album and why?
I think it has to be “Wasted Days”.  The four beats of guitar at the start are like a short fuse for what’s about to happen and then the song just explodes.  I love that moment of anticipation.  I have to switch picks when we play this song because I have to pick it so damn fast.  But as fast as it is it totally lacks the angst and aggression that you might expect in a song of that pace and volume.  On the contrary it feels really light and fun to me.  I think Scott (guitar and vocals) got it right when he said this song makes him picture flying around town and down hills on a skateboard.  Just pushing and pushing for more speed and more fun.  I listen to “Wasted Days” for all of its 1:47 and at the end I’m ready to climb back up and go again.
(Check out their video for “Acid Rain” (and please, post on your website): http://youtu.be/tOcL0xWsSyc
Visit the band here: http://www.facebook.com/totallyslow)