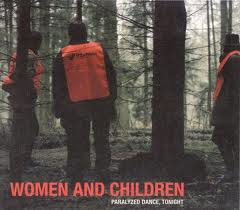 For their latest album, Tiny Rebels (out now on Empty Cellar Records), The Cairo Gang conjures up quick and defined songs un-housed in the shimmering of two burning electric 12-string guitars, and settled amidst a frenzy of cacophonous drums and bass.  The sound of them is a swirling desert night sky under which songs call to arms multiple voices that long to be freed from the constraints of song only to be obliterated by their own rhythms.
Intrigued by the band’s distinct approach to music making, Ghettoblaster caught up with leader Emmett Kelly to ask about an album that has provided him with a specific feeling or inspiration.  In the absence of a favorite, he chose to talk about Women and Children’s Paralyzed Dance, Tonight.  This is what he said about it.
What is your favorite album?
I don’t have a favorite album. I’m going to talk about the album Paralyzed Dance, Tonight by Women and Children.
Do you remember when you received or purchased the album?
I was in London working at the time when one of my oldest friends, Kevin Lasting, was living there. I went to his place and, over a joint, he played me some new music he and Cheryl (Shirley Gone) had made. Kev and I have known each other for a long time and had these types of run-ins every year or so. This time it felt like a lot more time had passed.
What is your favorite song on the album?
“Born to Poo.”
What is it about the song that resonates with you?
The subject matter speaks to me in volumes.
Have you ever covered a song from the album?
Yes, “Polly Ann”.
What is it about the album that makes it stand out against the band’s other output?
There is a space between what went down and what I heard and saw that I don’t know too much about. I love Woman and Children, but something really cuts deep about these songs in particular. And as a record it has a type of continuity that is really specific.
Have you ever given a copy of this record to anyone?  What were the circumstances?
Yes, but I’d rather not get too personal.
Which of the records that you’ve performed on is your favorite?
I just don’t know how to answer that. One of my favorite recording moments was with a singer named Jeff Harms recording a song called “Dorsal Fin”. He was unsure if he liked the song or if it was finished or something. We just played it and it unravelled so naturally. There was some magic inside of it and together we birthed it. It’s from the album The Myth Of Heroics. It really is the gem of that record too…in my mind.
(Visit The Cairo Gang here: https://www.facebook.com/TheCairoGang.)