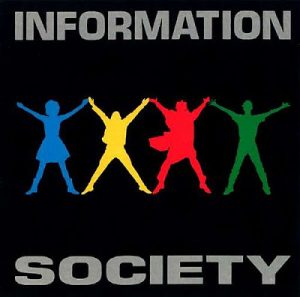 After more than eight years of global touring, seven solo albums on labels such as Pretty Lights Music, Old Tacoma Records, Hefty Records, and Mush, Eliot Lipp‘s status as an electronic music pioneer is known to scene experts and weekend warriors alike.  It is a widely known fact that Lipp is an avid connoisseur of vintage analogue gear, so much so that you would be in the minority if you caught a show or picked up an album that did not incorporate elements from his huge vintage collection of electronic instruments. This, in addition to Lipp‘s eclectic musical taste, is one of the reasons why his music is so unique, yet so relevant.
Ghettoblaster caught up with Lipp to discuss one of his favorite albums, and it seemed appropriate that he chose Information Society’s self-titled record.  This is what he said about it…
What is your favorite album?
Information Society (self-titled album from 1988).
Do you remember when you received or purchased the album?
Not really, but I was a kid and my dad had just bought his first CD player.  My brother and I got to pick out five CDs and this one was my first choice.
What is your favorite song on the album?
“Running.”
What is it about the song that resonates with you?
The lyrics seem really sincere and that was rare in dance music…still is.
Have you ever covered a song from the album?
I’ve tried to.
What is it about the album that makes it stand out against the band’s other output?
It’s got Kraftwerk-style synth sounds and ‘80s electro bass lines. When I was younger though I just loved the lyrics and the dude’s voice.
Have you ever given a copy of this record to anyone?  What were the circumstances?
Well, everyone knows “What’s On Your Mind” because that was the single, but I’ve made a lot of people listen to the other tracks on the record and they’re usually stoked on it.
Which of the records that you’ve performed on is your favorite?
Tacoma Mockingbird is my favorite of mine. I think it captures my own personal style in a way the other albums couldn’t.
(Catch Lipp on tour this fall: http://eliotlipp.com/tour.)