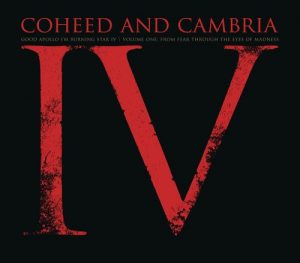 Back Pocket Memory, an unsigned alt-rock quintet from Burbank, California, recently delivered their self-titled EP, a record that showcases a hungry, young band with more than a few things in common with everyone from Circa Survive to the Foo Fighters.  The band enlisted the help of Erik Ron (VersaEmerge, Foxy Shazam) who made sure the band’s infectious energy was captured, and the release has already turned a few heads, including those at Alternative Press who premiered “The Prisoner,” the first single from the record.
Ghettoblaster recently caught up with Back Pocket Memory guitarist Eddie Rosales to ask him about his favorite record by another artist, as well as the BPM’s output.  Here is what he told us about Coheed and Cambria’s Good Apollo…
What is your favorite album?
Hard to choose just one, but I’d have to say Good Apollo, I’m Burning Star IV, Volume One: From Fear Through the Eyes of Madness by Coheed and Cambria.
Do you remember when you received or purchased the album?
I actually had a burnt copy of this CD about two weeks before it came out, and listened to it like crazy. I would visit the message boards and get all stoked on its release. I bought it at Best Buy the day it was released and continued to listen to it nonstop. There was even a reissue not too far after the original release, which I ended up buying as well. It is actually still unopened.
What is your favorite song on the album?
“The Willing Well I: Fuel for the Feeding End.”
What is it about the song that resonates with you?
That song is a great mixture of their talents and Claudio Sanchez’s ability to add pop sensibilities to the complex music. It’s just a dynamic song full of emotion and technicality.
Have you ever covered a song from the album?
We sort of did “Welcome Home” at a show many moons ago, but I wouldn’t count it as a legitimate cover. We’ve done it at rehearsals along with “The Suffering” and “Ten Speed (of God’s Blood and Burial)”, both from the same album.
What is it about the album that makes it stand out against the band’s other output?
It was a huge step forward in the production value in regards to their previous two releases. The vocals had a lot of texture and layers and subtleties, as well as the music and instrumentation. The guitar tones are still some of the best ones I’ve heard to date. The songs themselves are solid too, almost iconic. I doubt they’ll play a show without “Welcome Home” in the setlist.
Have you ever given a copy of this record to anyone?  What were the circumstances?
I honestly don’t recall giving a copy of it, but I’ve let a ton of friends borrow it. I wanted to spread this album to as many people as possible, so if someone showed the slightest interest in them, I’d let them take it for a few days. I even got my dad into them.
Which of the records that you’ve performed on is your favorite?
As far as my own records, I’d say this last EP we just did. It has some of my favorite parts and tones, and I used some killer guitars on it.
What is your favorite song on the album and why?
That’s like asking me to pick a favorite kid… But here goes. I love the mood that’s set for “What Have You Done?” It’s got the occasional call and response between my guitar part and Rob Gallagher’s bass parts while Jason Montgomery just lays down this driving beat throughout the verses. Ian Felchlin’s opening guitar lick is tasteful as well as his chorus parts, while the bridge gives me chills. Chris Pennington also just pours so much emotion into the choruses that’s just powerful.
(For more information about Back Pocket Memory, visit: http://www.backpocketmemory.com/)