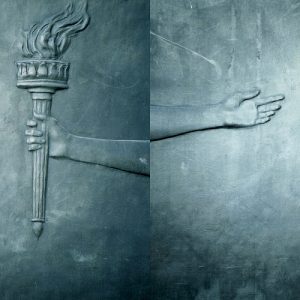 Hailing from North West Indiana, Native is comprised of four friends who came together after realizing they were each the most serious about music in each of their former high school bands. The guys decided to retire their childhood groups and instead come together to form Native in the Summer of 2007. Word of mouth about their live shows and their EP caught the attention of U.S. label and management company Sargent House who went on to sign the band and who has since re-issued their debut EP. Native have continued to tour non-stop building quite a following in a short time through their unforgettable live shows and well executed musicianship.
Native’s debut full length, Wrestling Moves, was released on January 23, 2010 on Sargent House. The album was Produced by Chris Common (These Arms Are Snakes, Pelican) at Red Room Studios in Seattle, WA. They recently finished recording their second full length album with Greg Norman (Russian Circles, Pelican) in Chicago. Sargent House will release the album in Summer 2013.
Ghettoblaster caught up with guitarist Ed O’Neil before the band’s North American tour with Caspian (dates below), to ask him about his favorite album, The Argument by Fugazi.  This is what he said about it…
What is your favorite album?
This is a really good question, because that’s really hard to answer. Favorite albums are always changing, and fluctuating as time goes on and taste changes. I suppose an album I’ve always loved and can remember having a very distinct, lasting impact on me when I was younger and continuing into adulthood would be The Argument by Fugazi.
Do you remember when you received or purchased the album?
I actually do remember purchasing this album. As a sixteen year old, my taste was, in retrospect, was pretty bad at that time, and I can admit that I was shopping for new music at a Hot Topic at a local mall in Indiana. For some bizarre reason, as I was passing over the twenty to thirty dollar CDs for sale.  At the time, I had seen and heard their name around from various publications and peers, and thought I’d give it a shot. It was pretty unlike anything I had heard before then. Plus, I totally dug the art, and still do.
What is your favorite song on the album?
Might be a common answer, but I’d go with “Cashout.”
What is it about the song that resonates with you?
The lyrics for the song are probably some of my favorite. The words paint a fantastic picture of the world around us, things we should notice and don’t a lot of the time. At least, that’s my take on it. Plus, the drum intro hooks you immediately, and never really lets go.
Have you ever covered a song from the album?
Sadly, no. I learned a couple of the guitar parts, such as “Cashout,” “Life and Limb” and “Ex-Spectator.” I’m not the biggest fan of covers, plus myself playing them wouldn’t do them justice. (haha.)
What is it about the album that makes it stand out against the band’s other output?
I wouldn’t say it is a complete standout, I’m a huge fan of most of their releases. I’d even say I enjoy In On The Kill Taker nearly as much as The Argument. Overall, it’s probably majorly a nostalgic factor for me, as it introduced me to a world of music and politics that still influences me to this day.
Have you ever given a copy of this record to anyone?  What were the circumstances?
My peers are often way more savvy and ahead of the game than myself, so most of them already knew this album. Wow, that makes me sound really uncool, but it’s the truth.
Which of the records that you’ve performed on is your favorite?
As cliché as it sounds, I feel the album we are releasing this year is by far my favorite. We took a very long time to write a relatively short album, but it’s one that we are all truly proud of, and can put ourselves completely behind it.
(Catch Native on tour at one of the following dates:
NATIVE 2013
Feb 25 – Oklahoma City, OK @ The Conservatory
Feb 26 – Albuquerque, NM @ The Gas Works
Feb 27 – Tempe, AZ @ Tempe Women’s Club
CASPIAN & NATIVE 2013
Mar 01 – Los Angeles, CA @ Echoplex also w/ Junius
Mar 02 – San Diego, CA @ Soda Bar And Lounge
Mar 03 – San Francisco, CA @ The Bottom of the Hill
Mar 05 – Seattle, WA @ Barboza
Mar 06 – Portland, OR @ Doug Fir Lounge
Mar 07 – Boise, ID @ The Red Room
Mar 08 – Salt Lake City, UT @ Kilby Court
Mar 09 – Denver, CO @ Larimer Lounge
Mar 10 – Omaha, NE @ The West Wing (no Caspian)
Mar 11 – Lawrence, KS @ Jackpot Music Hall
Mar 12 – Minneapolis, MN @ First Avenue 7th Street Entry
Mar 13 – Madison, WI @ High Noon Saloon
Mar 14 – Chicago, IL @ Subterranean
Mar 15 – St Louis, MO @ The Firebird
Mar 16 – Nashville, TN @ Exit/In
Mar 18 – Toronto, ON  @ The Garrison
Mar 19 – Lansing, MI  @ Mac’s Bar
Mar 20 – Newport, KY @ Southgate House
Mar 21 – Cleveland Heights, OH @ Grog Shop
Mar 22 – Pittsburgh, PA  @ Smiling Moose
Mar 23 – Buffalo, NY  @ Big Orbit Soundlab
Mar 24 – Burlington, VT @ Signal Kitchen
NATIVE ONLY
Mar 25 – Montreal, QC @ L’escogriffe Cafe Bar
Mar 26 – Kitchener, ON @ Jesse’s Rehearsal
Mar 27 – Toledo, OH @ Mickey Finn’s)