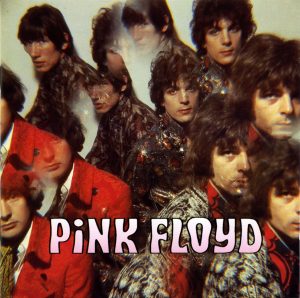 The Piper At The Gates of Dawn

Temple of Psychedelic Youth, the latest record from the Sonic Youth- and Pixies-inspired Dayton rockers, The Dirty Socialites showcases a band that has grown to include Mike Werthmann (drums) and Matt Webster (bass). Per usual, Derek Gullett and Gretta Smak are handling the vocals and guitars for the outing, a collection of edgy pop gems. They released Temple via Consumer Value Deluxe/Dayton Dirtbag Society Records in mid-December 2012.
With forthcoming regional dates in their sites, Ghettoblaster caught up with Gullett to discuss his favorite records, which were surprisingly not released by Sonic Youth or The Pixies.  This is what he said about Brainiac’s Hissing Prigs in Static Couture and Pink Floyd’s Pipers At The Gates of Dawn…
What is your favorite album?
I have changed a lot over the years, but for me I would have to say….. I have always been drawn to outsiders, weirdos, black sheep. I had doctors who thought I was autistic as a child. I had epilepsy and in the eighties neurology was both a science and a bit experiment; as it is today too. God. I would say Brainiac, it was like nothing I had heard before and reflected things I had enjoyed before but thought weren’t relevant, but the big one was probably The Piper At The Gates Of Dawn. It was named after a chapter in The Wind and The Willows, which was the first realization for me that rock or psychedelia could be literate. Both experiences were re-affirming that music could be changing, experimental, and enjoyable in so many different ways.
Do you remember when you received or purchased the album?
I had spent much of my time in high school playing Jimi Hendrix songs and thinking he was really “out there” until my friend Cory had put in Brainiac- Hissing Prigs in Static Couture we were in his car going to a pool hall in between Enon and Springfield, we got there and I remember making him let the thing play all the way through. There was so much going on and it was simple, but complicated. I had a similar experience with some friends (some years later at Antioch) when I was told I needed to “experience” The Piper At the Gates of Dawn. I really look up to Syd and Tim, for different reasons.
What is your favorite song on the album?
With me , the Brainiac experience was that I couldn’t stop listening to it. The songs were of a scope I can’t really explain it unless you experience it. I know I was changed then and there and I had to step up everything I was doing. That was the time for me when I changed from playing music to trying to create it, create a different something that was still reminiscent of what came before but could be sometime else entirely. Piper did the same, but in a different way. I owe a lot to both of them and more really…”
What is it about the song that resonates with you?

There are songs on all of these albums that are amazing but it’s more as a whole. It sums itself. You can’t take one without the others.
Have you ever covered a song from the album?
I have covered “Vincent” with The Professors and Interstellar Overdrive with Switchblade Serenade, but as a Dirty Socialite we haven’t covered any from these albums. We did cover “Dragg” and I would love to cover some of Syd’s stuff.
What is it about the album that makes it stand out against the band’sother output?
I can’t say that it was more important to me either of these albums than their other work, but they both effected or affected me with an infection that I am still judging myself by to this day.
Have you ever given a copy of this record to anyone?  What were the circumstances?
“I have never given it to anyone, but I remember playing it or gifting the experience like some kind of psych-disciple and it was not always well received, but I have done that with a lot of stuff ranging from Their Majesties Satanic Request, Piper, BJM (see Dig), to modern bands; Vile Imbeciles, US Maple (modernish) and even Flaming Lips or movies like Holy Mountain. Not everyone gets it, but sometimes you can make brothers or sisters, converts of the weird if you will.
Which of the records that you’ve performed on is your favorite?
I must say that it is the new The Dirty Socialites record, Temple of Psychedelic Youth, but if I had to pick another it would be a toss up between  The Whathaveya: Explodes Again or The Professors: Will Not Lie Down.
What is your favorite song on the album and why?
I really liked writing with partners. Gretta, Mat Webster and Brian Hoops it’s very different and exciting to write with all of them. The process of writing the album Will Not Lie Down (The Professors with Mat Webster) felt like a party and I really liked that we were trying out the waters of psychedelia with the song “In My Life.” Similarl in style, but not approach  The Whathaveya (with Brian Hoops) does nothing conventionally, we sort of all work together in groups and write as we go along, and the structure is totally whacked out, I love it. They’re all really fun to play and write with. On Temple it would to be “Do Maki Growl Ovi”