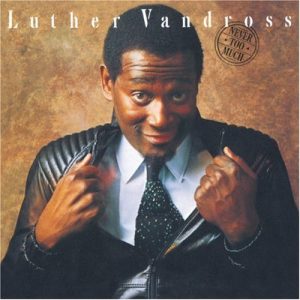 Yip Deceiver’s debut LP, Medallius, will be released September 17 on New West Records. The album is a fun, dancey party starter perfect for summer and similar to bands like Chromeo, Passion Pit, Two Door Cinema Club or MGMT… before they went psych.
MTV Hive described the Athens, GA-based synth-pop duo as “neon-hued, ’80s-R&B-inflected neo-disco” while Style Weekly referred to their music as “soulful electro-pop in the vein of LCD Soundsystem, Hot Chip and Beck’s Midnite Vultures.”
As a magazine that fully supports party starting, Ghettoblaster caught up with Davey Pierce prior to the bands September run in support of Medallius (dates below) to discuss one of the band’s favorite topics…Luther Vandross.  This is what he said about Vandross’ Never Too Much…
What is your favorite album?
As I am sure everyone who gets asked this question will tell you, it’s pretty much impossible to pick one album that is hands down my favorite. Although, if I had a gun to my head right this second, I would say Never Too Much by Luther Vandross.
Do you remember when you received or purchased the album?
I think this might actually be the only Luther Vandross record that I haven’t purchased. I have, however, been given/loaned/accidentally stolen multiple copies.
What is your favorite song on the album?
It’s actually a tie between the title track “Never Too Much” and “House Is Not A Home” (which was written by Burt Bacharach).
What is it about the song that resonates with you?
“Never Too Much” is such an amazingly simple love song. It’s dancey and sincere and just awesome. Luther had a way of saying exactly what he felt without coming off as cheap or cheesy. Then you have “House Is Not A Home,” which has one of the single greatest vocal performances of all time in my opinion. The guy could sing…
Have you ever covered a song from the album?
I haven’t yet, that isn’t to say that I haven’t wanted to. I just don’t think I could do him justice.
What is it about the album that makes it stand out against his other output?
Never Too Much was his first real solo record and I think he felt like he had a lot to prove. He had worked as a back up singer for Roberta Flack, co-wrote a song with David Bowie, and released a couple of albums with a couple different groups, but this was the first record that was all him.
Have you ever given a copy of this record to anyone?  What were the circumstances?
I’ve never given a copy to anyone, but I have definitely made everyone who has ever set foot in my house listen to it multiple times.
Which of the records that you’ve performed on is your favorite?
It seems pretty obvious that I would say Medallius, since its our latest record, right?
What is your favorite song on the album and why?
My favorite song on Medallius is a called “Double Future.” I think it’s my favorite because we wrote it, destroyed it, and built it back up so many times. We got to see it evolve into something that is completely different than how it started, which is cool, because that isn’t something that I normally do.
( Check out the video for their track “Get Strict” featuring Reggie Watts, a ballerina disco ball, Santa vs. Easter Bunny and a unicorn here:
Video: http://www.youtube.com/watch?v=DSelJI6xqfE
“Get Strict”: https://soundcloud.com/newwestrecords/yip-deceiver-get-strict
Then catch them on one of their forthcoming dates:
September 13 – Athens, GA @ The World Famous
September 14 – Nashville, TN @ The Hi Watt +
September 16 – Columbia, MO @ Mojo’s #
September 17 – Wichita, KS @ The Brickyard #
September 18 – Denver, CO @ The Hi Dive #
September 19 – Salt Lake City, UT @ Kilby Court
September 20 – Sacramento, CA @ Bows And Arrows
September 21 – San Francisco, CA @ Brick And Mortar
September 22 – Los Angeles, CA – Cheetahs #
October 4 – Champaign, IL @ Mike and Mollys
October 6 – Detroit, MI @ PJ’s Lager House
October 7 – Columbus, OH @ Tree Bar
October 9 – Buffalo, NY @ 9th Ward at Babeville
October 10 – Rochester, NY @ The Bug Jar
October 13 – Cambridge, MA @ The Middle East
October 17 – New York, NY @ The Living Room – New West CMJ Showcase $
October 20 – Baltimore, MD @ The Golden West $
October 21 – Washington, DC @ The Black Cat $
October 22 – Richmond, VA @ Strange Matter $
October 23 – Durham, NC @ Duke Coffeeshop $
October 24 – Savannah, GA @ The Jinx $