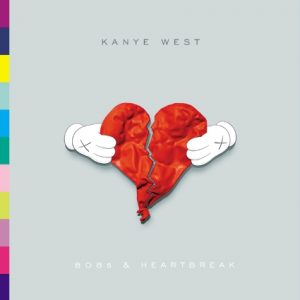 On Talk Normal’s sophomore LP Sunshine, out this October on Joyful Noise Recordings, the Brooklyn duo unveil songs that sparkle with melody and dissonance. Jarring rhythms and feedback-drenched guitar tones lace Sunshine’s nine surprisingly songful tunes – creating a sound informed by their predecessors (Cocteau Twins, Velvet Underground, Laurie Anderson & Creatures), but strikingly new.
With such a diverse range of influences, it was no surprise that Talk Normal’s Andrya Ambro had a tough time nailing down her favorite record as she waivered between greats by Brian Eno, Fugazi, Roxy Music, The Creatures and more.  Here is what she told us about her favorite record of July 12, Kanye West’s 808s & Heartbreak.
What is your favorite album?
My answer to this will change most likely depending on my mood.  Here are some front runners that I will not speak on, Brian Eno’s Taking Tiger Mountain, Tall Dwarfs’ Fork Songs, Henry Cowell’s Piano Music, Mahalia Jackson’s Gospels, Spirituals & Hymns box set, Depeche Mode’s Music For The Masses, Fugazi’s In On The Kill Taker, Laurie Anderson’s Big Science, Sonic Youth’s Bad Moon Rising + Sister, Max Roach’s We Insist Freedom Now Suite, Roxy Music’s For Your Pleasure, Moondog’s The Viking of Sixth Avenue, The Creatures’ Feast & Spacemen 3’s Perfect Perscription.  But today, July 12th 2012 at 5:33pm I pick Kanye West’s 808s & Heartbreak.
Do you remember when you received or purchased the album?
It was December of 2008, shortly after it was released.  My friend Ted McGrath told me I needed to listen to it, twice i think.  I wasn’t until late December that I just couldn’t stop listening.
What is your favorite song on the album?
“Love Lockdown.”
What is it about the song that resonates with you?
The arrangement is simple and stunning.  The fact that the acoustic drums are only in on the chorus is magnificent.  It’s very exciting to hear this kind of stuff in pop music.   Talk Normal never covered this but used its arrangement as a guide for a song on our previous album Sugarland.  It is probably in no way obvious to listeners, but feel free to guess!
Have you ever covered a song from the album?
No.  Not sure I ever want to…
What is it about the album that makes it stand out against the band’s other output?
It is cold and perfect, perhaps fitting for the ‘darker’ times within which I was wading shortly after the album’s release.  Basically this was my first revelation that not only was Kanye West the boldest but had revealed he was profound master of music, not just pop (to me).  This album was not what anyone expected.  Its use of space was brilliant.  So minimal.  The tangible drums against the 808s are a perfect sonic cohesion.  The lyrics are crushingly honest.  Usually I don’t smile at arrogance, but his I can tolerate and kind of like.
He uses digital distortion and made it a fad.  Production-wise that seemed unheard of at that time on his level of ‘pop.’  And Kanye sings!  … a total break from his previous humored/obnoxious wrapping.  To note, the albums that preceded I loved, the albums after I continually marvel at their grandiose creation and level of mastery.   But to me, 808s and Heartbreak is the most beautiful ‘fuck you’ album and it gives me great joy.
Have you ever given a copy of this record to anyone?  What were the circumstances?
I made Sarah (Talk Normal) listen to it a lot, probably in the car or in band practice.  Although I know she likes it too.  It was mutually earnest listening I suppose.   But I don’t think I ever physically or digitally gave it to anyone.  For my birthday, my friends Ted (same as above) and Kim Bost did give me a deluxe vinyl edition of My Beautiful Dark Twisted Fantasy with all of its varied art sleeves and colors.  I treasure it.  Not sure if that counts…
Which of the records that you’ve performed on is your favorite?
Our next record Sunshine!   It is our best sonic representation so far.  The drums are bigger and bolder and the guitars more sparkly and beautifully dissonant.  And the vocals are striking.  Or rather both Sarah and I as producers of the album (Christina Files co-produced) did a great job of sculpting our combined vocal intricacies and individual prowess.  The thing is we both sing and continue to explore this volleying of vocals (please ask for a vocal reference sheet when listening).  And above all, the songs are very carved and choreographed but still possess a wildness we give forth when live.  Listen up come Oct 23rd!
What is your favorite song on the album and why?
Today it’s “Cover.”  I still almost make myself cry whenever I sing it (I feel very vulnerable admitting this).   We co-wrote the lyrics with our friend Lilah Freedland.  Her words are moving and very very clever.  The lyrics specifically do not draw on any particular experience.  Rather they are just words and phrases that might go nice together and perhaps invoke a feeling far greater than any wordly experience.  I also think I stretched myself vocally for this so I’m glad it worked out.  Funny thing was this song also came out of our thinking that we should do a ‘cover’ song for the album.  Long story short, nothing was fitting.  I guess you can’t force that stuff.   With that in mind, I do feel the few songs that were on our short list to cover are present at “Cover’s” core.