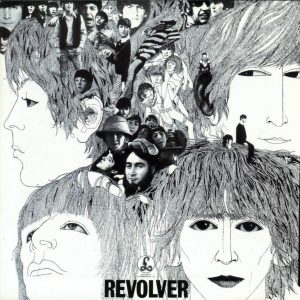 Whatever your favorite rock genre, Elusive Parallelograms play that…awesomely. And your second favorite genre. And a couple they just made up that you’ll love. Their two LPs and three EPs are where power pop meets shoegaze meets brainy prog meets acoustic instrumentals meets psychedelic meets metal pounding on metal, sometimes all on the same track. Whatever this song’s experiment may be, you’ll hear guitars bent at sharp angles, beauteous sounds bursting at unexpected moments, cryptic lyrics whose slick hooks dig in deep but whose puzzles won’t crack on one listen.
Ghettoblaster caught up with vocalist/guitarist Andrew Foys to discuss a record that has left him inspired, The Beatles’ Revolver.  This is what he said about it…
What is your favorite album?
Revolver by The Beatles.
Do you remember when you received or purchased the album?
My mom actually gave it to me right before a long road trip when I was like 14. I listened to it like seven times consecutively.  It was a good day.
What is your favorite song on the album?
“Tomorrow Never Knows”.
What is it about the song that resonates with you?
The production and the innovation of the whole track. Vocals through a leslie speaker, reversed things all over the place, maybe the first closed mic’d drums ever recorded, a lot of innovative things all going on at once. Really makes for a cool listening experience
Have you ever covered a song from the album?
No actually. I only really ever have a desire to cover a track if I feel that as a band we can put our own spin on it or take it somewhere else and in the end I think Revolver is just fine where it is
What is it about the album that makes it stand out against the band’s other output?
They seemed to be in a very adventurous mindset, really looking to push the sonic envelope at all times. To me it is the first time they put it all together to make something truly epic.
Have you ever given a copy of this record to anyone? What were the circumstances?
“Given to” may be a bit nice.  I think “taken from” fits my situation more aptly..I probably had to re-buy that freakin’ CD like 10 times.  One of my friends would always seem to borrow it and invariably not return it. Thank god for lossless audio files nowadays, ha ha.
Which of the records that you’ve performed on is your favorite?
Our most recent EP Fragments.
What is your favorite song on the EP and why?
Hard to say.  I love the diversity of “helium”, the bludgeoning of semantics and the darkness of “8 bit” all probably equally, but if forced to choose I would probably say “8 bit” because of the weird rhythm and the dynamics of the track.  Lots of the quiet/loud thing going on. It was also a very fun song to engineer due to variety of effects we got to employ.  Fun times.
(If you happen to be in Milwaukee, catch the band here…
June 29th – Milwaukee, WI – Summerfest
July 20th – Milwaukee, WI – Frank’s Power Plant)