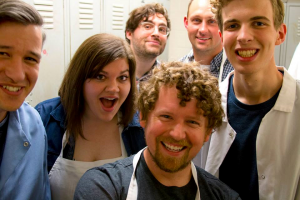 Good Luck Year is a six-piece, Dayton, Ohio-based indie-pop/rock band. Their music is a male/female vocally driven mix of acoustic, electric and electronic instrumentation with pop-sensible song structures. The band makes an effort to bring broad dynamics into each song and set. While the vocals and harmonies are the centerpiece of Good Luck Year’s music, the band also features acoustic/electric guitar, synths, piano, bass, and drums and is easily paired with many of the sub-genres of mainstream and underground rock.
Some of Good Luck Year’s musical influences include Mae, Jimmy Eat World, and Copeland. They have also drawn comparisons to The Civil Wars, The Anniversary, Hey Mercedes and Arcade Fire.
Good Luck Year’s latest EP, Tinder for the Fire, which the band released during this year’s Dayton Music, Art and Film Festival on September 19, was recorded by Micah Carli, formerly of Hawthorne Heights, in Troy, Ohio, at Popside Recording. The five songs on the album represent aspects of the band’s upbeat indie-rock sound, as well as darker and more stripped down acoustic tracks.