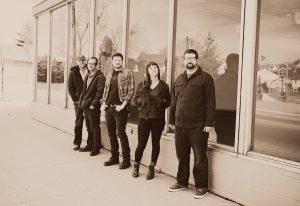 Emerging from shambolic basement shows and early roster shake-ups, over 16 years Max Fender and Joey Beck have coiled Midwest stalwarts Alone at 3AM into a tightly-wound muscular force with “a refreshing straightforwardness not found in most music” (Scene).
The band has been at a dead run since 2010’s album Cut Your Gills and 2012 single From an Ohio Basement, reveling in hard-earned rock and roll escapism while revealing substantial songwriting chops. Embedded in these earliest songs, some of which like “Blacktop Cracks” remain live favorites, are unresolved questions. Often the only answer is found in the act of living in the fleeting combustion of a three minute song, that brief musical connection between band members and an audience.
On their 2012 LP Midwest Mess Alone at 3AM explored the balance between volume and personal reflection, which cemented Fender’s reputation as one of Cincinnati’s most prolific and insightful songwriters. The website Bucketful of Nails was waiting for it, claiming, “occasionally an album comes along that has that fire, that smoldering spark your soul requires.” With songs like “Weekends at the Cape” and “Walk Away,” the singer has become more confident in the precisely personal while the band investigates new sonic territory – from the brittle postpunk of “Wolf in the Woods” to the stomping set-closing catharsis of “Burn This Town.”  Throughout, Sarah Davis’ harmonies fuse with and console Fender’s tattered vocals in the band’s most far-reaching release to date. Popmatters deemed the record “raw, honest, literate storytelling, [with] brilliant song structures, [and] a built-in integrity.”
As the most recent and strongest iteration of Alone at 3AM prepares their 2015 release Show the Blood, location again plays a singular role as Fender, reaching for simple moments of grace, ruminates on his home in the Midwest, a place that’s never quite here or there.  And though influences can be heard throughout – a buzz through, say, Detroit, southern California or St. Paul – the end result is a testament to the power of a confident and road-tested rock band coming to terms with living in the in-between.
Alone At 3AM’s new studio album Show The Blood will be available on CD and digital formats September 18 via Sofaburn Records. This is what fender had to say about it:
“This album is about me trying to be as open an honest as I can. In a time when it’s very hard to find anything authentic I wanted to write a record about struggles and short comings and how you need to keep trying when things don’t work out. I wrote it to hopefully connect with other people that feel this way and maybe it will help them keep going when times are tough.”
Today Ghettoblaster has the pleasure of sharing a stream of the album, which you can enjoy below:

Tags: Alone At 3AM, Featured

If you don't know @kingropstyle, let me introduce