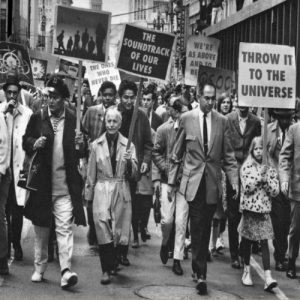 Throw It To The Universe

THE SOUNDTRACK OF OUR LIVES
THROW IT TO THE UNIVERSE
It’s always a bummer to hear about one of your favorite bands calling it quits, particularly one that has been on such a roll. 2009’s Communion was such a refreshingly eclectic treasure of Nuggets-era guitar pop rock that it seemed TSOOL could keep this sort of thing up forever. I suppose there are worse ways to go out, as the band deliver one last shot of awesome to soften the blow. Throw It To The Universe is less overtly rocking than its predecessor, but no less satisfying. It takes a few more spins to get in the band’s frame of mind on this one as they opt for a spacey, Pink Floyd-esque approach this time out. There is a bit of dissent amongst my friends and I, some preferring the more rocking first half while I find myself drawn to the Floyd-ian sweep of the last half, but that’s just record nerd dissecting. TSOOL are a phenomenal band, and as bummed as I am that they’re calling it a day, it’s hard to be too pissed being on the receiving end of a swan song this good. (Yep Rock) by Andrew Lampela

Tags: The Soundtrack Of Our Lives, Yep Rock