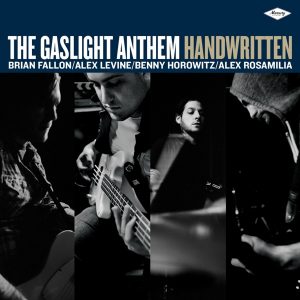 The Gaslight Anthem
Handwritten
Brian Fallon never met a cliche he wouldn’t wrap his dusky vocals around.  And so on the Gaslight Anthem’s Handwritten, frontman Fallon finds himself dancing (in the moonlight,)  driving (with the radio on,) and bleeding all over the place (the man references blood more than Johnny Cash used to sing about trains or prisons.)   Fallon waxes romantically with his trademark E Street  shmaltz about girls in party dresses, with Bette Davis eyes, that help get him through the night; for a guy who made his name singing about blue jeans and white t-shirts, he certainly hasn’t stretched himself much for his major label debut.  Nearly every song gallops along at the same chugga-chugga tempo, with the requisite sha-la-la’s and whoa-oh-oh’s for maximum singalongability.  Mostly what you get here are songs whose parts fit together as sturdily – and predictably – as Legos… and that’s the best thing about them.  When Fallon tries to fiddle with the formula, he mostly fails:  “Keepsake,” about an absentee dad, sounds like Tom Petty as interpreted by Scott Stapp; “Here Comes Your Man,” despite the promising title, echoes neither the Velvets nor the Pixies (surprise, it’s another bro anthem). There are moments when the band strives for a grungy heaviness (as on “Too Much… get ready for it… Blood,”) but these simply come off as leaden and lumpy.  Speaking of grunge, he deluxe edition of the album includes a throwaway karaoke  cover of Nirvana’s “Sliver”  and the godawful “You Got Lucky,” which sounds like the ’Anthem channeling Foreigner. (Mercury) Jim Testa