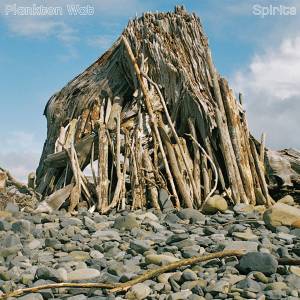 Plankton Wat
Spirits
The album opens with the kind of loping, Eastern-tinged guitar and prominent bass overtop of a swirling drone that immediately brings to mind early Popul Vuh. This is far from a bad thing. The rest of the album splits itself between cosmic guitar-and-electronics exploration and more traditional, folky guitar-on-the-back-porch pieces with a subtle electronic gloss on them. It comes across as something like the late, lamented Jack Rose going through a big krautrock phase. Percussion pops up once and a while, both in drums machine and live varieties. It doesn’t have the inner space sweep of the best space rock and the pieces all blur together in the end. It’s hard to tell where you are in the album without looking at which track you’re on, and they tend to begin, wander along for a while and abruptly fade out without much change but as music to put on and close your eyes to, it’s hard to beat. (Thrill Jockey) by Aaron van Dorn