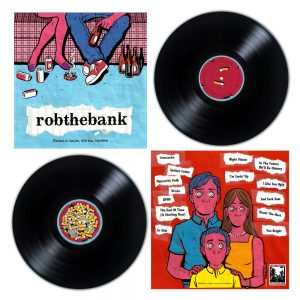 It depends.  In regards to doing rock posters a lot of times I’ll research a band if I’m not familiar with them, listen to their most recent album, or read lyrics to some of their songs to see if any imagery pops into my head.  Sometimes, ideas come to me like a lightning bolt, and other times I feel like I’m banging my head against a wall. 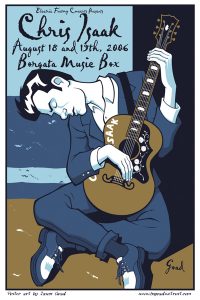 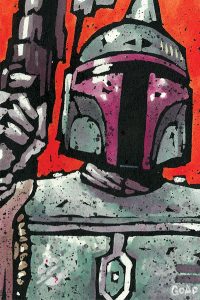 Are you stoked about the new Star Wars movies? Are you any closer to achieving the dream you told Dayton Most Metro about doing an official piece for that franchise?
Yes, I’m extremely excited about the new Star Wars movies. Star Wars was an important part of my childhood, in fact I have rather distinct memories of seeing the first Star Wars at the drive-in movie theater that was next to the Dayton Mall at the ripe old age of 3.  I had a lot of the toys and used to draw all the characters.
For years I was an apologist for the prequels, my defense always being “Well, that’s George Lucas’ vision and you can’t argue with that,” but looking back on the prequels I was pretty disappointed.  I’ve tried to figure out whether it was because the movies were truly lackluster or whether it’s just because I was at a different place in my life and if I only allowed myself to see them through the lens of my 3 year old self I would appreciate them more.  But I think I finally came to the conclusion that they lacked the magic of the originals, to me at least.
But getting back to the new ones, it totally caught me by surprise and the announcement that JJ Abrams was going to be directing it with some great writers behind him, just seemed like they learned their lessons from the prequels and were going to do everything right.  I’m a huge JJ Abrams fan, especially the series Lost and just thought, of all the directors out there, he was the one who could not only bring his signature approach to the series, but could also get to the core of what it was that was so special about the originals and replicate that.
As for achieving my dream of doing something official for Star Wars, I’m proud to say I accomplished that this past summer through Topps.  They do what’s called artist sketch cards where they select artists and send them a predetermined amount of blank trading cards to just go to town on. I had worked on some Mars Attacks ones for them previously (208 total) and I guess they liked what they saw and asked me back for their Star Wars Galactic Files series. I completed 106 cards total and it was probably the closest I’ve felt in a long time to just being a kid with his paper and markers drawing the stuff that made him happy at the time.
Now the way sketch cards work is that as soon as you finish your pieces you send them back to Topps and then they are randomly inserted into packs of cards and released to the public.  These are not mass produced, just one of a kind pieces of art that one lucky person will pull from a pack, kind of like a Wonka Golden Ticket, just less golden (unless it’s of C-3PO of course).
(See more of Goad’s art here: http://ingoadwetrust.com/.)