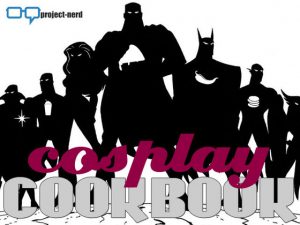 There are a lot of fun and exciting things happening in the cosplay world right nod and one that I’m really excited for is the Project-Nerd Cosplay Cookbook! When I started hearing rumblings about this it immediately grabbed my attention.  Two of my favorite things in the world are cosplay and cooking. Having the two come together is amazing!  Not to mention that this is a unique idea.
Shortly after hearing about it my buddy, Detty Cosplay told me that he was going to be involved. This got me even more excited because now I had a friend involved in this really awesome project. Shortly after that I received an email from Iggy who runs Project-Nerd and he asked if I had any interest in being the Aquaman for this cookbook. I nearly had a heart attack. The day I got the email I was at a friends house for an evening of board gaming. I read the email stood up and I kid you not, did a little dance.
After calming myself down a bit I sat down to write my reply which I believe was just me being overly excited about being asked to be involved and to play one of my favorite characters no less! It’s not every day that you get an email asking you to be the King of Atlantis! I was also informed that Oki-Cospi would be playing Queen Mera. This is also exciting as she is an amazing cosplayer.

I was later informed that it was all because Detty Cosplay had thrown my name out to Project-Nerd  I owe him a HUGE thank you. So I’m going to say it here. Thanks John! I also want to thank Iggy and the rest of the people from Pro-Nerd for giving me a chance to be involved in this.
What I’m trying to say here is that I’m extremely excited and honored to be involved with such and awesome project.
As of  May 12, 2014 the Kickstarter has launched and you can find it here and for more information about the project check out Project-Nerd’s website!