I am just a few days removed from Lexington Comic and Toy Con, which was my very first convention in costume. I will say that I did have a blast! Overall the experience was amazing. Here’s a rundown of how the day went.
I think that the hardest part of the whole experience was making sure that my wife and I had everything together and ready to go before we left. I got on part of my costume and then double and triple checked that we had everything we need before we take off. The last thing we wanted to do was drive two and a half hours only to find out we had forgotten a very important part of the costume. The drive there was not bad aside from the fact that the closer we got the more nervous I became. By the time we arrived I was just a big pile of nerves.
When we arrived to the convention it was packed. There were lines all over the building but no one really directing traffic at all. It took us about 20 minutes to figure out which line was the preregistered line. This is where the small complaint comes in. The preregistered line was extremely long and weaved around the building 4 or 5 times with no clear beginning or end and none of the volunteers seemed to know how to help or where people were supposed to be going. After finding the end of the line it was about an hour-long wait to get checked in and get your wrist band. The line for people who had not preregistered was about a 10-minute wait and then you could just walk right into the convention hall. I have a feeling that the people in charge of Lexington Comic & Toy Con learned a valuable lesson from this year’s fallout, as there were a lot of very unhappy people.
One of the best moments came while standing in line when we ran into Knightmage (@Knightmage). He is a cosplayer who has given me a lot of advice and has just been an all around great guy and not to mention does amazing work for charity. When we saw him he stopped and posed for a picture with us and I gave him a print to say thanks for all the help he had given me (he seemed truly happy and excited to get the print too). It was a really great moment for me to meet him in person finally and had completely put my nerves to rest. I also don’t even have to mention how amazing his Blade and Deadpool costumes were. Holy cow! 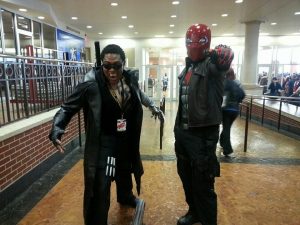 Once we made our way through the line and got our wristbands and headed into the hall the fun began. The hall was packed and it was very slow-moving but everyone was friendly and excited to be there. I was met with lots of “Awesome Costume,” and “Wow, nice work,” complements that you can’t help but feel great getting. I was also humbled by the amazing costumes people had put together and just how awesome everyone was. Whether being asked to pose for pictures or I myself requesting to pose with people, everyone was willing to drop what they are doing and rock a cool pose.
One of the highlights of my day was coming across the very well known Ani-Mia’s (@Ani-Mia) booth and having her light up when seeing me costume and saying “Wow, really nice!” She was incredibly friendly and took the time out to talk to my wife and I and pose for some pictures. I will say I had a bit of a geek out moment when meeting her. Very cool.

After hours my wife and I were invited to go to dinner with Comic Con Cutie Hailey (@CCC_Hailey) and her friends at a local place called the Village Idiot. There we met up with some of her friends including a photographer that I had talked to a bit on twitter in the past Wesley Smith (@ThePortraitDude). The Village Idiot had an amazing burger called the Idiot which I cant recommend enough. That paired with a West Sixth IPA really hit the spot but after the hours walking around the con we were all just exhausted. So after dinner we said our goodbyes and headed our separate ways. My wife and I double and tripped checked everything again and then we piled into the car for the long drive home.

This was a great experience for me. I went in not knowing what to expect at all and came out really excited for the next convention and ready to meet more amazing people. I want to thank everyone whom I met at Lexington and the people who put on the Con as well. Other than the hiccup at the beginning it was an amazing time and I came away with some great new friends and an overall great outlook on my future as a cosplayer!
Thank you guys again for taking the time out to read my blog. Your input is valuable to me so please feel free to contact me on Facebook or on Twitter and give me your input.