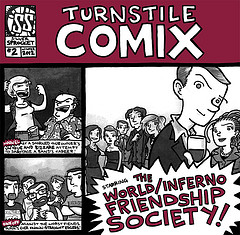 NYC orchestral punk-cabaret gangsters The World/Inferno Friendship Society and punk-rock cartoonist Mitch Clem recently teamed up to present Turnstile Comix #2, a fusing of music, art and storytelling with a brand new 7” vinyl EP accompanied by a 40-page comic book depicting some of the group’s craziest road stories, embellishments and all.
The EP represents World/Inferno’s first proper release since 2011’s The Anarchy And The Ecstasy on Chunksaah Records.The accompanying comic book was scripted and illustrated by Mitch Clem, known for his “Nothing Nice to Say” web-comic published free online and printed by Dark Horse, and more recent “My Stupid Life” strips for Razorcake Fanzine.
Turnstile Comix #2 is available now for advance mail-order directly from Silver Sprocket, and will be in stores March 12 with retail distribution direct from Revolver USA and Last Gasp. It will also be available from The World/Inferno Friendship Society along their upcoming east-coast tour dates and beyond (listed below).
Ghettoblaster recently questioned TW/IFS’s Jack Terricloth about the joint venture.  These were his hilarious responses to our FTHM stock questions.
When did you begin writing the material for this project?

When the exciting , dynamic , anarchic, sex gang cult the SILVER SPROCKET BICYCLE CLUB asked us to score a comic book they were writing about US. We started directly after the phone call.
What was the most difficult song to take from the initial writing stage through recording and mixing?

Nothing is easy in this world. We had to decamp to some compound upstate (New York) and bang the damn things out. Songs are difficult until they are beautiful and then there they are, staring at you and making you feel old. just try and keep on your feet.
Why were they so troublesome?

Because waking up is bothersome but that’s the job we asked for so complaining would be fey.
Which of the songs on the record is most different from your original concept for the song?

When your heart is true form follows function. Are you suggesting otherwise?  Damn you Ghettoblaster- and what’s with your name anyway?
Did you have any guest musicians play or sing on the record?

We’re a damn collective with like 50 members. Any guests had to get beaten in, go to town to buy groceries, cook dinner then tour for nine months.
Who produced the record?  What input did that person have that changed the face of the record?

All of the many, many members in my band involved in this project produced the record. They are: Sandra Malak, Francis Morin, Mora Precarious, Matthew Landis, Rebecca Schlappich, Leslie Wacker, Greg Daly, Avi Ehrlich, Aaron Hammes, Scott Hollingsworth, Osamu Kawahara, Mitch Clem and A Nation Of Amanda. This gestalt is the face of the record.
Is there an overarching concept behind your new album that ties the record together?

There is! Glad you asked. It is about The relationship between 20th Century physicists Werner Heisenburg and Niels Bohr and the ethical struggle between pure thought and political reality in Nazi Europe. Could also be a love story.
Have you begun playing these songs live and which songs have elicited the strongest reaction from your fans?