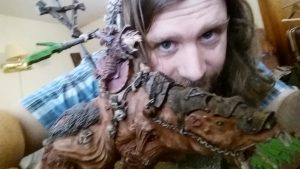 Yeah, I’m a little late. Sue me. It’s not as if the emergence of January somehow nulls my opinions from 2015. Anyway, here’s a bunch of stuff I liked last year.
Best Albums (in alphabetical order)
Baroness – Purple
Everything a fan of guitar-driven rock could possibly wish for. This album rivals anything the band has previously released.
CHVRCHES – Every Open Eye
I was worried that CHVRCHES would fall into a sophomore slump. I was wrong. It’s every bit as good as The Bones of What You Believe.
Dog Party – Vol. 4
Imagine an alternate reality in which the Ramones were teenage girls born around the turn of the 21st century.
Goatsnake – Black Age Blues
Awesome riffs and dumb lyrics crooned beautifully. They’re back, baby!
Mac McCaughan – Non-Believers
Sweet, sappy and kinda gothy songs that seem to be about Star Wars and suburban desperation. “Lost Again” may well be my favorite track of 2015.
Motel Beds – Mind Glitter
I got your indie rock right here. It’s from Dayton, and it’s fucking fantastic.
Tempel – The Moon Lit Our Path
So epic, man. You don’t even know.
Weedghost – Luxury Umbrella
Yeah. I’m in this band. What of it? It’s still a killer album.
Best Compilation
Aquabear Legion Volume 5
This two record compilation features 24 of the best bands in Ohio being awesome. There are too many great tracks to even begin mentioning highlights.
Best Video Games (in alphabetical order)
Rocket League
This game brought me back for just one more session more than anything else that was released in 2015. Well played, Psyonix.
Star Wars: Battlefront
This is just about everything I want in an online multiplayer game. The graphics are gorgeous. The sound design is flawless. Matchmaking is rocky, and there’s a lack of depth. On the other hand, Star Wars.
Best Tabletop Games (in alphabetical order)
Coconuts
It’s a dexterity game for kids. Nevertheless, some of my favorite gaming memories of last year involve gathering around the table for intense, coconut-flinging action.
Warhammer Fantasy
Let me make perfectly clear that I am not talking about Age of Sigmar. I’m talking Warhammer 8th Edition and The Ninth Age. That’s right. The community-created ruleset is far superior to Games Workshop’s neutering of their own property.
X-Wing Miniatures Game
A steady stream of awesome expansion ships from both Disney-approved canon and the old Expanded Universe keeps this game from getting stale.
Best TV Shows (in alphabetical order)
Ash vs Evil Dead – Season One
It was one of those hold-your-breath moments for Bruce Campbell and Sam Raimi fanboys/fangirls. Could this series possibly capture the magic of a decades old indie darling franchise? The answer is a resounding yes. From the beginning through the ending, it’s full of the gore and humor fans wanted. I’m already looking forward to season two!
Rick and Morty – Season Two
This show is essentially the perfect cartoon for adults. It bounces back and forth between highbrow and lowbrow humor too fast to even notice. The voice-acting is top notch, and the continuous threads that run through its episodic nature are well thought-out. Get Schwifty!
Best Movies (in alphabetical order)
It Follows
This is my kind of horror movie. Awesome music, the supernatural, and an ever-building sense of tension.
Mad Max: Fury Road
The best feature-length car chase I’ve ever seen. As an added bonus: feminism!
Star Wars: The Force Awakens
Pure fan service and that’s just fine with me. It’s nice to see familiar faces, but the new cast of characters are the strongest and most intriguing in the film.
Best Comics (in alphabetical order)
Bitch Planet
The idea seems at first like pure exploitation. Then, you actually read it. Everyone should be getting this book.
Low
It’s a tale about family ties and a dying planet. It also features my favorite artwork in an ongoing series. Stunning.
Best Podcast
We Watch Wrestling
I don’t listen to many podcasts these days, but when I do they’re usually about wrestling. The boys at WWW provide the most fun wrestling podcast available on a weekly basis. That’s the bottom line!
Best Trend in Wrestling
The Excellence of Independent Wrestling
The indies are killing it. Whether you’re into Lucha Underground, PWG, NJPW, or one of the countless independent promotions across the world, there is no denying that indie wrestling is on the rise. NXT is proof that indie wrestling can even be profitable for massive, heartless corporations run by dinosaurs. When even WWE takes notice and raids talent, you know you’re onto something.
Worst Trend in Wrestling
Vince McMahon
Please retire, Vince. Please. You’ve made your mark on wrestling. It will last forever. Now go away. Hand the reins to Triple H, as he’s doing a bang up job with NXT. Take Stephanie off the air while you’re at it. Allow the business to grow and evolve, and those shitty Raw ratings will recover.
Best First World Problem
Too Much Entertainment
I find myself more and more in the same predicament every year of late. There are too many TV shows to watch and too many games to play. On Netflix alone I haven’t even started Master of None, Daredevil, Jessica Jones, or Making a Murderer. How am I supposed to play The Witcher 3 and Metal Gear Solid V and Fallout 4 all within one calendar year? I haven’t even started Undertale yet!