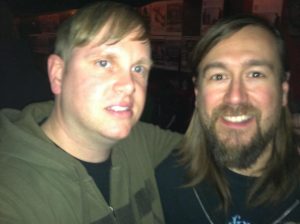 Name & Position: Tim Anderl, Web Editor
Best Album: Although it was released in November 2011, Pianos Become The Teeth’s The Lack Long After was my fave.  Hands down.
Best New Band: They’ve been around, but I just discovered them in 2012 – Mixtapes!
Best Underappreciated Album: Nightbeast’s You’re Welcome.
Best Reissue: The Chameleons Script of the Bridge.  Not sure when it came out, but it was definitely my favorite this year.
Best Live Band: CONVERGE.  Russian Circles run a very close second.  And Brian Cook is one of the nicest dudes ever.
Best Live Audience: Definitely not Avett Brothers due to the douche nozzle who tried to fight us because Ohio’s Fraze Pavilion has a crappy, completely unintuitive way of designating their seating.  Also not Alice Cooper because the couple in front of me crop dusted me the entire night.  Andy Dick was there too.  Yuck.
Favorite Interview: So many good ones this year, but these are my favorites: Scott Hedrick from Skeletonwitch, he’s hilarious; Bob Crawford from Avett Brothers, he was so honest and sincere; Greg Dulli, sardonic wit for days; Max Sollisch of Dolfish, modest, appreciative, and thoughtful.  Mike Hill from Tombs is the supreme ruler for 2012 for recording a cover of David Bowie’s “Heroes” just because I asked him to!
Best Movie/TV Show/Book:  Not sure on the movie.  As for TV: Hell on Wheels, Sons of Anarchy, Boardwalk Empire, and The Walking Dead.  Rhiannon Frater’s As The World Dies trilogy was my favorite book series of the year.
Biggest Surprise (Good): Afghan Whigs are leaps and bounds better performers in 2012 than they were in the ‘90s.  Imagine my surprise considering their ’94 concert at Hara was in my top five favorite concert experiences of all time.
Biggest Surprise (Bad): 70 percent of the 1,000+ people who work at my day job have advanced degrees.  40+ percent have PhDs.  So there’s a 70 percent chance the person I heard eating potato chips in the bathroom stall has 6+ years of higher education…and disgusting habits.